We reached out to several IBEW International Representatives responsible for the Franklin house discovery and asked that they share thier story with us. The first submission comes from Mike Nugent. Brother Nugent, now retired, would move through many seats during his tenure with our International Office in Washington, DC, but the last one would lead to a discovery which would serve to upend much of the folklore surrounding our birth. What follows is Mike's accounting of the discovery, in his own words. 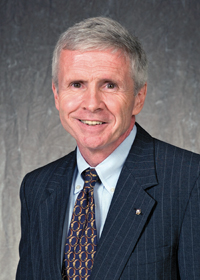 Mike Nugent Birth days and months are generally something that is held sacred by most everyone. Birth years are another matter. If you are poor, young and large for your age, age inflation by a few 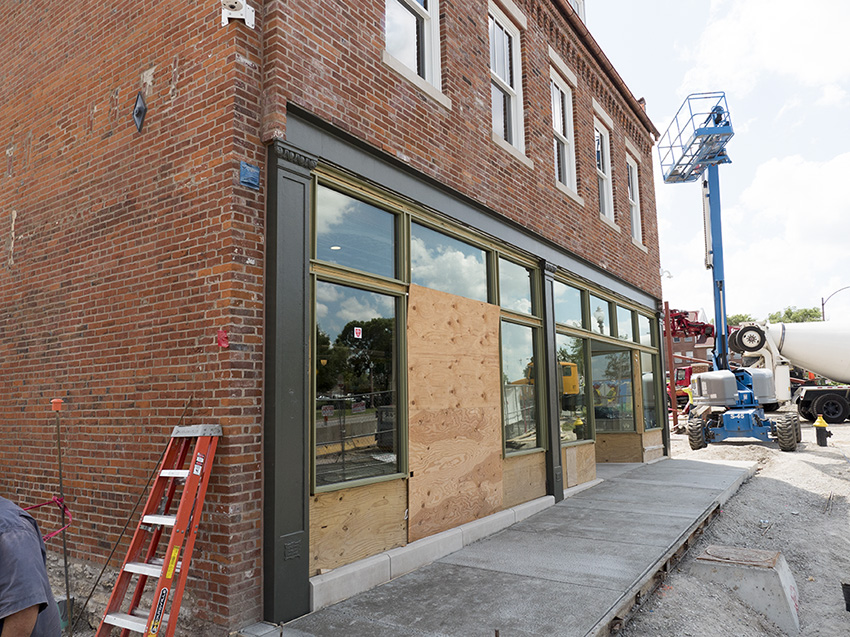 NBEW Houseyears to get a job is a small thing. The willingness and diligence with which you apply yourself to the work is a large thing.

The cover article in the July 1893 issue of the Electrical Worker, written by J.T. Kelly, the Grand Secretary-Treasurer of the NBEW, provides the basis of most of our early biographical facts about Henry Miller. “Mr. Miller was born on January 5th, 1858, in Gillespie County, near Fredericksburg, Tex.” There are a limited number of outside sources that can verify these claims.

One such source is Miller’s death certificate issued by the District of Columbia in June, 1896. It lists his age as 43, which would correspond to a birth year of 1853. From this official document (most likely) came the year engraved on Henry’s tombstone in D.C. The D.C. Coroner may have estimated 43 years based on how weathered Henry’s features may have looked. It is doubtful that the coroner factored in the type of work that Henry did. Linemen who work outside in the most unpleasant of weather for years on end can appear older than they naturally are.

An excellent outside source is the U.S. Census Report from 1860, specifically from Gillespie County, Texas, Precinct No. 5, Caldwell’s Hill Post Office. A post office map from that time period shows Caldwell’s Hill as southeast of Fredericksburg. This location would qualify as “near Fredericksburg, Tex.”

The 1860 Census also provides some unusual details. It lists the birth month for those aged less than one year before June 1st. A “Henry Miller” is listed as “5/12” of a year. This would calculate to a birth month of January which agrees with Kelly’s article which lists “January” as Miller’s birth month. His parents are listed as Peter and Jane (perhaps), born in Virginia and Missouri respectively. This contradicts Kelly’s article which stated Miller’s parents were German immigrants. However the Gillespie County school system of the day taught in the German language. Peter’s occupation was stated as a school teacher.

Kelly’s article goes on to say that Miller “was raised on a ranch until nearly 14 years of age. His first introduction into electrical work was in the employ of the United States Government, building a telegraph line from San Antonio, Tex., to Fort Clark and intermediate points, connecting all the military post along the Rio Grande.”

It is a fact that in June of 1874, the U.S. Congress approved funding ($100,000) for military telegraph lines on the Texas frontier. In April of 1875, Lt. Adolphus W. Greely was sent to begin the project. If the 1860 Miller was our man, he left the ranch before age 14 and started on the telegraph line at age 15, which fits with Kelly’s article.

Kelly’s article then describes Miller’s employment following the telegraph project. “After leaving the Government employ in 1875 he went to work for the Western union….as a repairer, on the Morgan road from Algiers (New Orleans), La, to Morgan City (LA). He afterwards had charge of a division on the (Gulf, Colorado and) Santa Fe (Railway Company which included a telegraph in the Texas legislation); was assistant superintendent for the Erie Telephone (and Telegraph) Company in the southwest district….”

I find it highly plausible that the 1860 Miller may have enhanced his employability at one or all of the above jobs by subtracting two years and stating a birth year of 1858, the year Kelly notes in his article.

It is said that luck happens when preparation meets opportunity. Years ago I was selected to work in the I.O. for the late International Secretary Emeritus from L.U. 357, Las Vegas, Ralph A. Leigon. We were alone once when Ralph said, “Mike, tell me something----are you lucky?” I thought for a second and said, “I believe I am quite lucky.” “Good, I would rather have someone lucky than smart.” Then we laughed.

Years later I was tasked with organizing things from our archives in Washington, D.C. I was working late one evening when our only copy of the first constitution caught my eye. I opened it up to find a list of all the grand officers with their addresses. I had uncovered Henry Miller’s address, 2728 Franklin avenue! I remembered the detailed description written by the first grand secretary-treasurer, a college graduate, J. T. Kelly.

“A Brief History of The INTERNATIONAL BROTHERHOOD of ELECTRICAL WORKERS” was printed in the program in October, 1921 for the IBEW’s 25th Anniversary and 16th Convention. The founders “met in a room near Twenty-eighth and Franklin avenue and organized the International Brotherhood of Electrical Workers.” I could not wait for the next day to find a good street map of St. Louis to image Miller’s address. I suspected it would not be in a quiet residential area. I shared my find with my good friend I.R. Larry Liles of the I.O. and he found that Franklin Avenue had been renamed. He also found a single house on that block using Google Earth (Editors note: Google Earth satellite images show the renovation underway).

The Media Department was quite fortunate to have just hired International Representative Mark Brueggenjohann from St. Louis. He was scheduled to go home for the next week-end and I asked him for a favor. “Would you be kind enough to drive by this address with your camera and see what is there now? I may have found the address where the first convention was held.”

Mark came back on Monday truly excited, grinning from ear to ear. “You would not believe it. The address is for the only building standing on that side of the block!” He showed me his 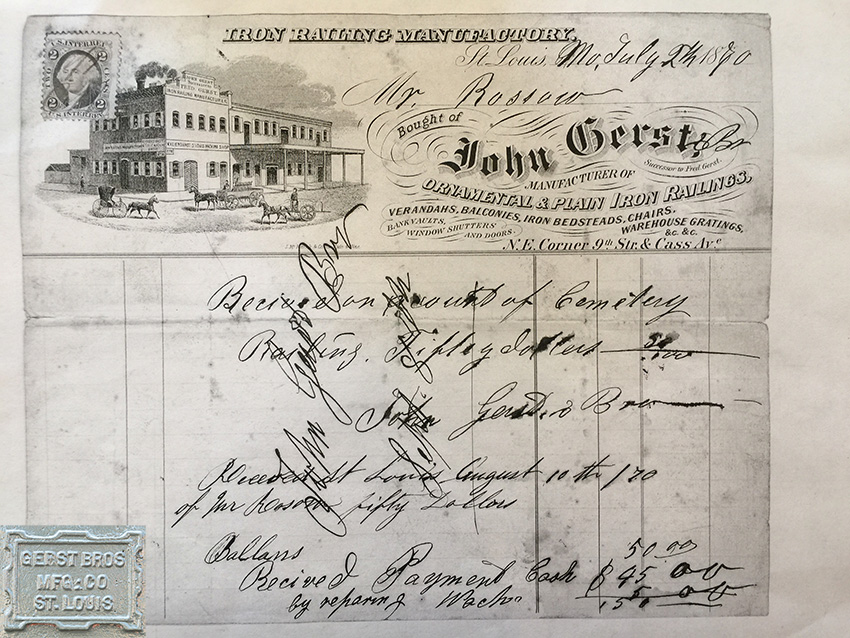 It took me a while to carefully: copy the map, Kelly’s story, the photo, other documents relating to the first building identified as where the ten founders met and draft a memo to present to the officers. Important and prudent decisions take time.

I retired in 2009 after serving our brotherhood for 31 years in the I.O.

In 2015 I received a call from Curtis Bateman who took over part of my I.O. responsibilities. Curtis wanted me to come down and find the document in our Archives proving Henry Miller’s address. It took me all of five minutes. Director Mark Brueggenjohann was gleeful with the find and confided in me that there was a movement afoot to purchase the property. I was surprised but most delighted to see the front page article in The Electrical Worker, December, 2015 edition, announcing the plans.

In January of 2016 I received a surprise phone call from John Kahrhoff of L.U. 1. He told me that he had found my name and phone number in a retired business manager’s file.

Mike Nugent on PeriscopeI was in Chicagoland at the time and we chatted for a while about IBEW history and the team working on Miller’s place. John said, “I don’t know if you can make it, but there will be a job meeting starting at 8:30 tomorrow morning at the site.” “Watch me. What is the address?” I drove through a snow storm in Illinois, but I got there early. I’m just a cranky, old-goat wireman. I was lucky enough to serve a fabulous apprenticeship in L.U. 134 of Chicago and that is the sole reason I am not short of questions and ideas. Formative-stage job meetings are like ice cream for me.

After the meeting I was treated most kindly by Business Manager Frank Jacobs in L.U. 1’s hall. He, John Kahrhoff and David Roth met me in the I.O. in Washington a few days later to gather ideas about what to do and not to do with the opportunity in St. Louis. We viewed the museum, the archives, and various points of interest around town. We ate dinner in the bar and restaurant that previously had rooms above to rent. Brother Henry Miller lived and tragically died in one of those rooms as a result of a work related accident, age 36, January 5, 1860 – July 10, 1896.

There is no telling what would have happened to our fledgling electrical union had there not been the labor giant and visionary, Henry Miller. As grand as this building is, it can never repay our indebtedness to Henry’s many sacrifices for us. This is hallowed ground. 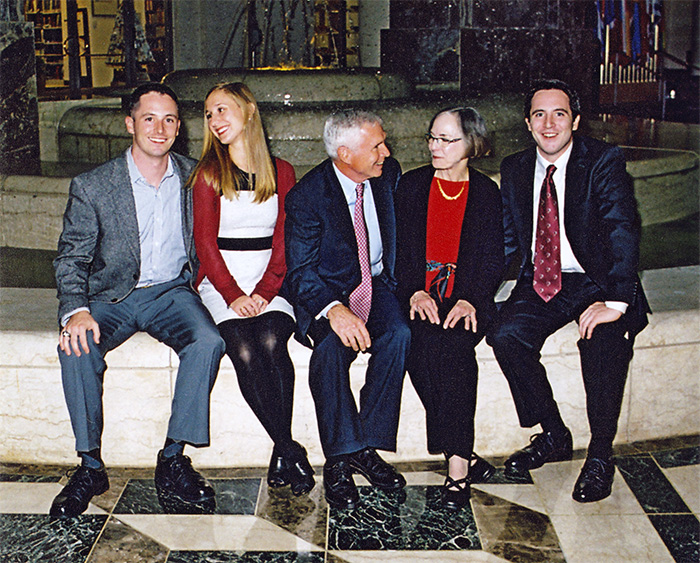 Brother Mike Nugent and his family celebrating the October 2015 retirement of his wife of 40 years (L to R): son Daniel and his wife Colleen, Mike and his wife Joyce, and son Kenneth

He was elevated two years later to become director of Financial Operations, in charge of the Investment and Accounting departments. Mike helped develop a program that enabled the IBEW to move from lender to full partner with real estate developers, vastly increasing the union's profit potential. He also helped select a master custodian, a financial services firm that brought all IBEW investments under one accounting umbrella. Over the years since, the NEBF's pension fund has gone from a small trust to one of the largest Taft-Hartley funds in the country.

In 2002, he transferred to the Media Department, where he helped put together the IBEW Museum, which opened in 2007 at the International Office. In the process, he helped cull the old archives, catalog and photograph the current collection and became knowledgeable in the conservation of historical items. He spent a great deal of time soliciting donations and mined e-Bay in search of the correct pieces to illustrate and highlight the IBEW's role in the development of the electrical industry in the United States and Canada. His command of knowledge about the union and its history has enthralled countless visitors to the museum.

As archivist, curator and tour guide of the IBEW Museum, his work pays off in the appreciation the museum elicits from young and old alike. Many see the museum as the embodiment of their careers. "They have paid their dues to help build our great union," Nugent said. "This is a small gift to them." (Editors note: During Mike's time as our Curator he narrated several short museum videos. You can find them on Youtube: Plasters Lineman, Secret Ballot Box, The Light Bulb; Mike often boasts about our current curator, Brother Curtis Bateman - he is very proud of the improvements Brother Bateman has made to the IBEW Museum in Washington, DC. One such improvement can be found here: Archiving the IBEW Journal. Curtis has been an invaluable resource for us throughout the renovation project.)

"I always tried to make a visitor's trip to the museum a personal adventure," Nugent said.

Mike and his bride Joyce live in North Arlington, Virginia. Mike tries to swim most days for about an hour at local pools and also rows a 'single' on the Potomac River as a member of the Potomac Boat Club. He is active in the Sons of the American Revolution, Potomac Lodge #5, FAAM and the Electric Post 769, American Legion. As a DC Licensed Tour Guide he gives free tours to all beloved IBEW brothers and sisters. Mike said, "I will never be able to repay my enormous debt to the IBEW." 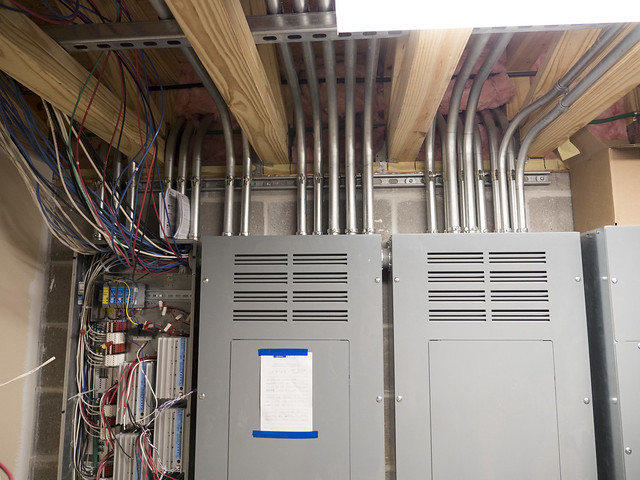