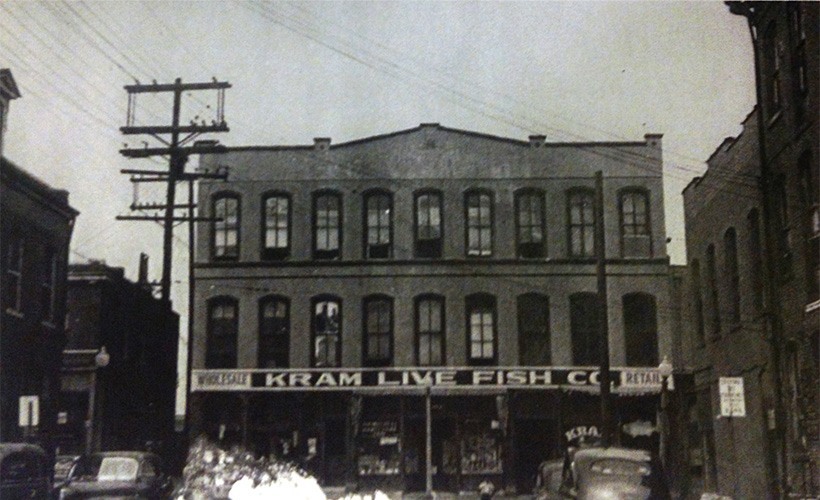 The legendary dance hall story surrounding our birth first appeared in print in the 1927 edition of The Journal of Electrical Workers and Operators written by M.A. Newman (page 399) which states,

“The question of organizing a union was discussed during one noon hour, which finally led to calling a meeting at Stolle Hall, 1309 Biddle Street, later the meeting hall for Local 5221.”

This article was written around the time of the 19th Convention in Detroit, Michigan. We wondered why there was no mention of Stolle’s before this time. A search of the Missouri Secretary of State website shows the original registration for STOLLE'S HALL BOWLING AND ENTERTAINMENT CLUB on October 12, 1888. And as you may have noticed, the name is misspelled on the famous photograph used to tell our storied history. As it turned out, we were going over plowed ground – our International office already knew and admitted they tried to fix the history during the 34th Convention, but the Stolley’s folklore was imprinted on the convention diehards. We asked the International office why the Stolle’s name was never mentioned by our founding fathers during our early years. We also wondered why it was never listed as our “first” meeting place. In fact, Local 5221’s first meeting place is clearly listed in early editions of THE ELECTRICAL WORKER as 305 ½ Olive Street, St Louis, Missouri. We were unable to find any mention of Stolle’s before its introduction in Brother Newmans article. In addition, the address listed in the article conflicts with the address listed in several contemporary publications of the day – Stolle’s, as advertised, was located at 1311 Biddle Street.

Clearly this was due to the fact that AFL 5221 predated the IBEW and the THE ELECTRICAL WORKER publication.

The address for Stolle's Dance Hall is clear in an article from the March 7, 1891 St Louis Post Disptach detailing an early AFL Local 5221 strike against Municipal Light and Power Company, headed up by our first President, Henry Miller. Although not mentioned by name as Stolle's, the address is clear. A transcription of the article is below:

A Change in the Scale of Wages Causes a Walk Out-The Strike May Extend to Other Companies-The Meeting Today.

The linemen of the Municipal Electric Light & Power Co., about thirty in number, are out on strike, and there is a probability that the strike will become general. The cause of the strike is a change in the rate of wages paid, which was inaugurated Thursday by Supt. Ayer, and which created such dissatisfaction that yesterday the force of linemen quit work and voiced their complaint against the Municipal company. Heretofore the linemen have been paid at the rate of $60 per month, or practically $2.50 per working day. It is claimed by the company that there were many times when the linemen would be idle for several hours during the day, but that there was never any reduction made in their wages for that reason. The day's work was considered as comprising ten hours. There were occasions, however, according to the Municipal management, when it was necessary for the linemen to work over time, and when this was done they invariably charged the company for the extra service. This fact caused the change in the scale of wages.

On Thursday Supt. Ayer went to the plant of the company at Eighteenth and Papin streets, and notified the linemen that hereafter they would not be paid on a monthly basis, but on the basis of $2.30 for a day's work of ten hours; that their wages would be docked for such time as they were not actually at work, and that they would be paid for all overtime work. There was only one gang of linemen absent when this announcement was made, and those who heard it made no protest against the new system. But appears that yesterday morning, having had time to talk the matter over, the linemen came to the conclusion that the change was likely to prove injurious to their interests. They reported at the Municipal Co.'s plant at the regular hour but instead of going to work they waited the arrival or Supt. Ayer. When he arrived the superintendent found four gangs of linemen with their wagons, etc., idle, and was informed that his terms were not satisfactory. The linemen had a proposition before him for a scale of wages at $2.50 per day, based upon the new system.

REFUSED TO HEAR THEM

Supt. Ayer, it is stated, then notified the men that be would not treat with them as employees of the Municipal Co. as long as they remained idle, but that if they would go to work he would entertain any proposition they might make and endeavor to meet their views as far as possible. The striking linemen refused to go back to work, and the strike then went into practical effect. Not a lineman of the Municipal Co. went to work yesterday, and none reported for duty to-day. Last night a meeting or the Linemen’s Union was held at their hall at Thirteenth and Biddle streets, and further preparations were made to continue the strike if the Municipal management failed to come to time. A committee of five of the strikers, headed by President Miller or the union, was appointed to wait on Supt. Ayer and again request a reply to their own proposition. Another meeting was also called at the hall, Thirteenth and Biddle, for 2:30 o’clock this afternoon, at which their fellow linemen of the Missouri and Laclede companies, were asked to be present.

At 11 o'clock this morning the committee from the linemen waited on Supt. Ayer and laid their proposition before him. The Superintendent made them the same reply as at first, declining to treat with them on any basis as long as they remained away from duty. The linemen were equally firm, and the breach was widened. It is said that they have assurances that all the electric light linemen of the city will go on strike to enforce the demands of the Municipal employees, and also that the telephone linemen have promised their support to the strike. It is probable that the meeting this afternoon will develop some important results. Should all the linemen go out on strike at once the result would prove decidedly serious to the city and to business at large. Supt. Ayers of the Municipal company could not be seen to-day, but Secretary Kelly stated that the above facts covered the case. Mr. Kelly said that the only result of the strike so far had been considerable delay in new line work in the western part of the city, but that no serious trouble would be caused, as there would be no trouble in filling the places or the strikers should they persist in staying out. Nevertheless, the company awaits the action at to-day's meeting with considerable apprehension. It is understood that President Miller of the Linemen’s Union is managing the conduct of the strike. It has caused no disturbance in the other work or the company and is confined strictly to the linemen.

We also found this advertisement from the March 6, 1891 St Louis Post-Dispatch:

There was no consistency amongst the reports of our formation in newspapers around the country. IBEW Curator Curtis Bateman addresses these accounts below:

I promised I would pass along some contextual information about the IBEW’s 1st Convention to assist you in your project. Rest assured, the history of this event is well documented at the IO. We have newspaper articles spanning the country, original charters, commentary from the Founders, the original convention report along with the original AFL Application for and Certificate of Affiliation.

I have attached a few of our resources with a brief description of each below. I will be sending more in my next email.

(Note: we have added some of the resources offered by Brother Bateman below and transcibed the text for you. We have also linked the archived IBEW Journal articles referenced below) 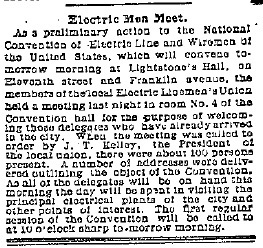 As a preliminary action to the National Convention of Electric Line and Wireman of the United States, which will convene tomorrow morning at Lightstone’s Hall, on Eleventh street and Franklin Avenue, the members of the local Electrical Lineman’s Union held a meeting last night in room no. 4 of the Convention Hall for the purposes of welcoming those delegates who have already arrived in the city. When the meeting was called to order by J. T. Kelley, the President of the local union, there were about 100 persons present. A number of addresses were delivered outlining the object of the Convention. As all of the delegates will be on hand this morning the day will be spent in visiting the principal electrical plants of the city and other points of interest. The first regular session of the convention will be called to at 10 o’clock tomorrow morning. 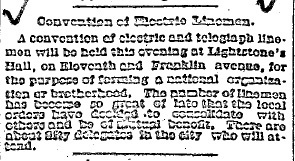 A Convention of Electric and Telegraph lineman will be held this evening at Lightstone’s Hall, on Eleventh and Franklin Avenue, for the purpose of forming a national organization or brotherhood. The number of local lineman has become so great of late that the local orders have decided to consolidate with others and be of mutual benefit. There are about 50 delegates in the city who will attend.

"Both contain a brief press release about the call for a National Convention held at “Lightstones Hall.” The Nov. 22 article claims 50 delegates, while the Nov. 23 claims “over 100 delegates.” Again, this was an embellishment which meant to add some legitimacy and significance to the event. And since exaggerating the attendants from 10 to 100 eliminated the believability of using the Franklin house, a more appropriate venue was chosen for the press release: Lightstone’s Hall."

(Image: Lightstones Hall, courtesy Missouri History Museum, used with permission. "Lightstones," purported in most newspapers around the country as the location of our first convention, would prove completely false.)

“Those who attended the convention will remember the time they had hiding from the reporters trying to make it appear that we had a great delegation.” – Henry Miller

As you mentioned earlier, this issue contains many historical insights into our origins. It contains a very lengthy article submitted by Local 1 which begins with the story of AFL Local 5221, formed in 1890 during a meeting with AFL organizer Charles Cassel at “Stolle’s Hall, 1309 Biddle St.” The article continues with the origin of the NBEW a year later in the building at “28th and Franklin Ave.” The article also contains a picture of Local 1’s first meeting place on 305 Olive St. It also confirms the address of the NBEW’s first IO at the “Emilie Building at 904 Olive St. across the street from the Pope Theater.”

With all of the various buildings mentioned in our origin stories, it’s no surprise that confusion eventually arose. By 1960, the Stolle’s Hall detail found its way into the NBEW origin story and effectively replaced any mention of the building on Franklin Ave. An attempt was made to correct this mistake with the 1991 book “Dreams of Dignity, Workers of Vision: A History of the IBEW.”

Another early history submitted by Local 1.

Another authoritative source for the history of the first convention and our early years. It also confirms the meeting place on “Franklin Ave. in a poor area of St. Louis.”

Brother Bateman quotes Henry Miller from the November 1916 edition of The Journal of Electrical Workers and Operators, admitting that our 10 founding fathers hid from reporters. This 25th Anniversary issue of the IBEW includes a report in the correspondance section from Local 1 that states, "The meetings were held in a room on Franklin Avenue near Leffenwell." This would indeed be Henry Miller's boarding house.

In the first edition of THE ELECTRICAL WORKER the first union hall of the Electric Lineman and Wiremans Local 5221 is shown below - 305 1/2 Olive Street (building with external steel stair, image courtesy Missouri History Museum, used with permission). 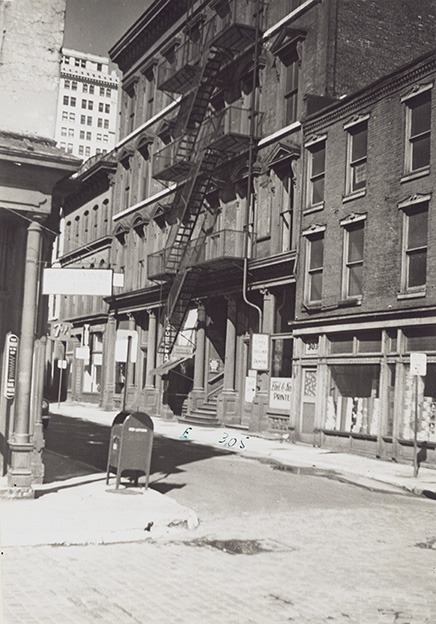