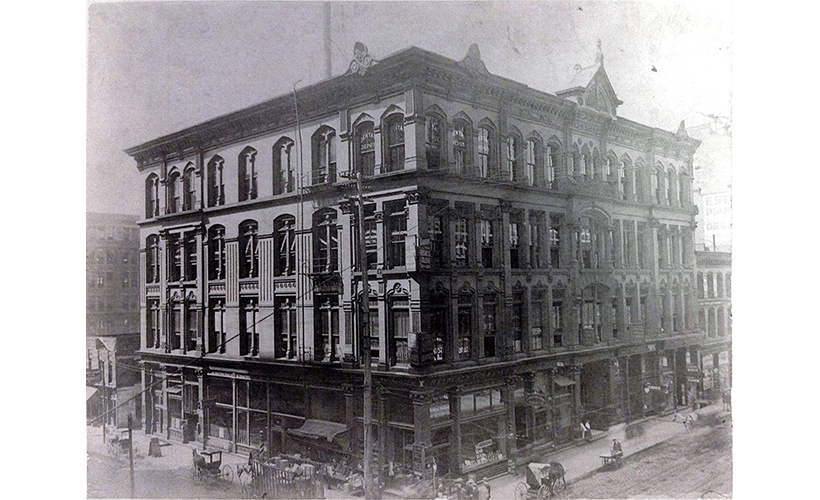 The first home of the National Brotherhood of Electrical Workers of America - the Emelie building at 904 Olive Street, St. Louis, Missouri. Publisher of THE ELECTRICAL WORKER, JT Kelly, would publish the memorial below in his office at #14 Emilie. (Image: Missouri History Museum, used with permission)

Born on a ranch near Fredericksburg, Gillespie County, Tex., on January 5, 1858, of German parents, he passed his boyhood days on the ranch, with little opportunity for attending school. 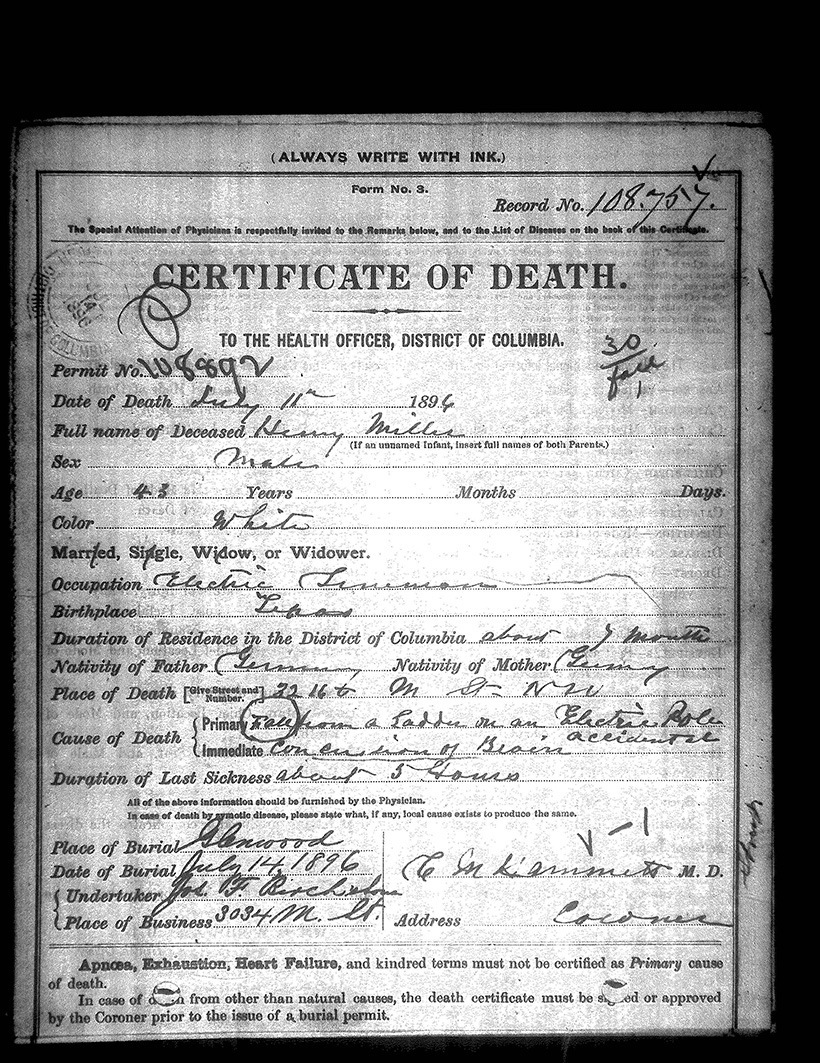 His first introduction into electrical work was in the employ of the United States Government, building a telegraph line from San Antonio, Tex., to Fort-Clark and intermediate points, connecting all military posts along the Rio Grande, starting in as a water boy, at the age of 14; and at the age of 17, in 1875, when he quit the employ of the Government, he was considered a good lineman. He next worked for the Western Union, then as line repairer for the Morgan road in Louisiana, for the Santa Fe Railroad and for the Erie Telephone Co. in the Southwestern district, as assistant superintendent, remaining with this company for six years, until 1885.

After being employed by different electric light companies he landed in St. Louis in June, 1886, securing employment with the Municipal Electric Light and Power Co. and remained in the employ of that company until 1890, when he started out to work in different cities, organizing a Union in each city he worked in. The National Brotherhood of Electrical Workers is the result, and for four years to write the history of Henry Miller was to write the history of the Brotherhood.

Henry Miller had his faults; and who has not? But his were of judgement and not of the heart. He was generous, unselfish, and devoted himself to the task of organizing the electrical workers with an energy that brooked no failure. Those who criticize him can afford to be just to his memory. Let them consider the good the organization he founded has accomplished and will continue to accomplish, and then ask the question

"Is not the world better because Henry Miller lived in it?"

and take care that if the same question is asked when they pass in their checks that the answer will not be a negative one. Had there been more Henry Millers in our organization our progress would be greater in proportion to the number. Requiescat in pace

(A transcription of the original article published in the The Evening Star – July 11, 1896. A second article is available here)

Henry Miller, aged forty-three, the head lineman in the employ of the Potomac Light and Power Company, fell from a pole last evening about 11:20 o’clock on Newark avenue near the Tenleytown road, in the Cleveland Park subdivision, and died from the injuries after suffering for nearly five hours. At the time of the accident and for some hours afterward the man was not thought to be seriously injured. He became unconscious about half past 3 o’clock this morning and at 4 o’clock seized with convulsions, followed by death.

The storm of night before last had a bad effect on the Cleveland Park circuit of the wires of the Potomac Electric Light and Power Company, and for two nights the lamps would not burn. The lights are incandescent globe and there are about forty-nine lamps on the circuit. To remedy the complaint Miller was sent yesterday to get the circuit in operating order. He had as his helper August A. Boerensen, a lineman employed by the company. The two worked hard until midnight and had located the trouble in one light. Miller was working along at the wires, when all of a sudden he lost his hold and fell down the ladder upon which he was standing. In his fall he struck his helper, knocking him down and somewhat easing his fall. The fall did not render him unconscious, and he complained of pains in his back. Word was immediately sent to the power house of the Georgetown and Tenleytown electric railway on 32 nd street, and a car sent to Georgetown for a physician, Dr. Kuriz was found and carried to the scene.

The injured man was brought to his boarding house on M street, where he was put to bed

Shortly after midnight the doctor left, stating that he would call this morning, but when he arrived he was surprised to find that his patient was dead.

Miller had been in the employ of the Potomac Electric Light Company for about nine months, and was regarded as an excellent workman. His fall last evening was due to his receiving a shock from catching hold of a live wire, though just how the accident happened no one will ever know. All Boerensen knows is that there was a sudden flash of light, and the next instant Miller came tumbling down the ladder, head foremost, striking him upon the head and shoulders, and both men going down. Miller was an extremely well-built man, having a splendid physique and weighing about two hundred twenty-five pounds. Boerensen is a well-built man, but the heavy weight of the fall of Miller was too much for him to stand.

Coroner Hammett was immediately notified of the occurrence, and at noon today he investigated the circumstances of the case. After hearing the testimony of a number of people and that of Superintendent Purdy of the company, he came to the conclusion that the affair was accidental, and deemed an inquest unnecessary. After examining the body he came to the conclusion that death was caused by concussion of the brain, and gave a certificate of death to that effect. The remains were turned over to Undertaker Birch for burial, the Potomac Light and Power Company paying for the funeral expenses.