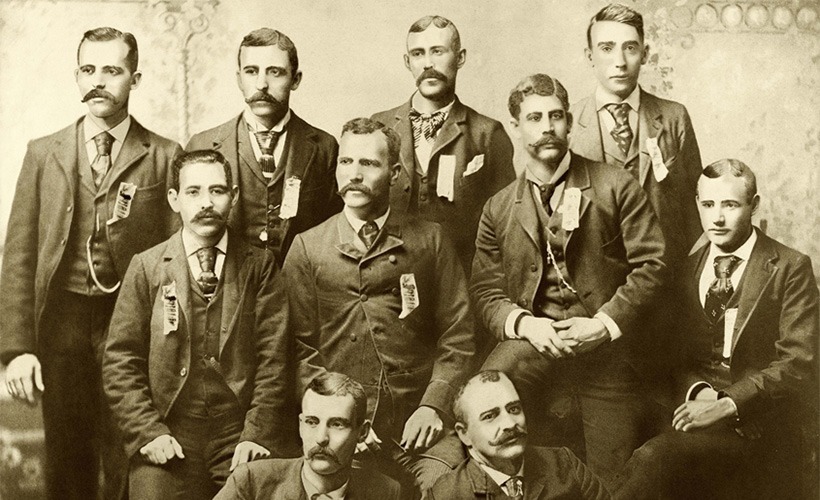 A museum in his honor.

The man who sparked a movement is getting a museum to honor his memory. At a time of terrifyingly high mortality rates and paltry pay in the new field of electrical work, Henry Miller knew what needed to be done, and he dedicated his life to making it happen. From the boarding house where he lived almost 125 years ago, the lineman founded the National Brotherhood of Electrical Workers, which would later become the International Brotherhood of Electrical Workers.

Now that modest brick house is being turned into a museum, thanks to St. Louis Local 1, the flagship union of the IBEW.

Foundation of a Brotherhood

The quest to purchase and restore the Henry Miller house began in 2009 with a video produced by the International Office’s Media Department on the IBEW’s origins. The six-minute video tells the story of Miller and the Brotherhood’s early days in St. Louis. It also discusses the role of the boarding house and, perhaps more importantly for Local 1, that it was still standing just six miles from their office, at 2726-2728 Dr. Martin Luther King Drive. Realizing that this structure was one of very few tangible items left from the Brotherhood’s birth, Local 1 leaders set out to bring the building home.

“If this is the home that our founding fathers met in to form the National Brotherhood of Electrical Workers, then we have to save it,” said Local 1 Business Manager Frank Jacobs, also a fourth generation IBEW member and grandson of the district’s first international vice president.

In August of 2014, Local 1 leaders embarked on their mission to buy the house. They finalized the purchase less than a year later for $53,680. While the building bears the marks of its previous incarnations, like weather-worn signs betraying its past as a corner market, little is known of the building’s history since Miller’s time, or how it evaded demolition when everything else on the block has since been torn down. While some of these answers may be lost to history, Local 1 leaders have been digging into the past to determine what the building looked like at the turn of the last century, and restore it for posterity.

Local 1 leaders are committed to returning the building to its original style as much as possible so visitors will see what Miller saw in his day. The first floor, then a saloon, will be converted into the museum portion, with display cases showing pieces from Local 1’s collection, including some personal items of the founding fathers and a copy of the original minutes from the AFL affiliation. Miller’s room, located on the second floor, will also be restored. Modern touches will be included where necessary, such as an elevator to ensure the building meets Americans with Disabilities Act standards. There will also be space for meetings and events.

“We’re going to be able to bring the building back to the way it was,” said Local 1 Recording Secretary John Kahrhoff, who also directs business development.

Once Jacobs gave the official go-ahead last year, Local 1 leaders began evaluating the house to determine its condition and whether it would survive a restoration. Any fears they had were quickly alleviated. A mechanical engineer found the structure to be in surprisingly good shape.

Old photos show the block, called Franklin Avenue back then, crowded with buildings in the late 1800s. When the adjacent buildings were demolished—the building now stands alone on the stretch of road—the brick sides were left exposed. A protective coat that was applied to prevent leaking during that time also saved the brick. The façade however, was replaced in the 1920s and will need to be redone to reflect that of Miller’s era.

While the foundation is in good shape, the interior, having been abandoned for decades, requires extensive work. The long-vacant property came with a leaky roof that rotted the entire interior wood structure. It will need to be completely removed, as will the back wall, to allow access and restoration.

According to Kahrhoff, a single lamp bulb still hangs from a four-foot long ragwire Edison base socket in the middle of the room where the founding fathers met, suggesting the level of neglect this section of the building has endured since early last century. Surrounding this artifact of electrical history are dilapidated walls and ceilings, chunks of plaster and wood and random remains from the building’s past. Metal headboards lie rusting on the floor while aging wood boards hang from the ceiling like stalactites.

A Local 1 contractor will act as a general contractor on the project. Local 1 will also do the wiring.

The boarding house is located in a neighborhood called JeffVanderLou. Once a poor and neglected area, it is now experiencing revitalization. The house sits 300 yards from the Scott Joplin House, an official historic site. A contemporary of Henry Miller, Joplin was an African-American composer and pianist known largely for ragtime compositions, many of which he produced while living there in the early 1900s, according to the Division of State Parks website.

In addition to renovating the boarding house, Local 1 has purchased an adjacent empty lot and plans to include a Founders’ Park with 10 utility poles, each with a statue of a lineman to represent the 10 founding fathers. Granite benches and commemorative stones are in the plans, surrounded by a wrought-iron fence.

The entire project is expected to cost approximately $6 million. Local 1 will be turning over the project to the newly formed Electrical Workers Historical Society, which is soliciting donations to cover the cost of the renovation as well as ongoing maintenance.

If all goes as planned and the construction is completed in time, the Society will have a ribbon-cutting ceremony around the time of the international convention next year, Sept. 19-23, 2016, which is the 125th anniversary of that fateful meeting in St. Louis.

“We hope that all IBEW members will be inspired by the house and the history it holds, and see it as a home for everyone in the Brotherhood.” Jacobs said.