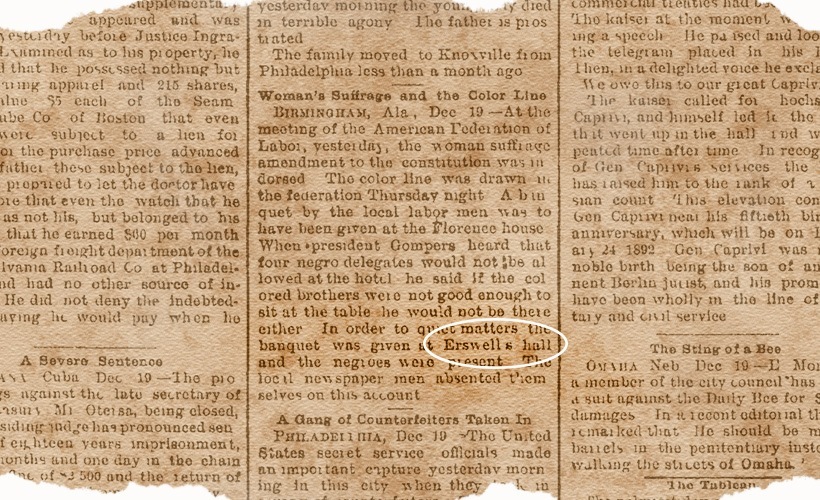 Henry's first AFL Convention was held at Erswell's Hall. We researched the Alabama Archives hoping to find an image of the Hall without success. (IMAGE: Decatur Daily Republican, December 19, 1891. Proof of Gompers foresight, on this day he would stand with his minority trade unionists!")

Our formation is formally announced by AFL President Samuel Gompers in his report during the afternoon session at the Eleventh Annual Convention on December 14, 1891:

“The Electrical Workers were organized into a National Union, from the various local unions affiliated to the Federation.”

This would be Henry Millers first convention as a delegate for Electrical Wireman and Lineman’s Union, No. 5221, hailing from 2728 Franklin Avenue, St. Louis, Missouri (see image).

President Gompers report is a fascinating array of topics still crucial to the success of the American Trade Union movement, along with some unique to the time period.

What we learn during the afternoon session on the fifth day of the convention is surprising. President Gompers is replaced as Chairman as nominations for President are opened. Three men are nominated for the position, one of whom is August Delabar of the Bakers International Union of New York. Delabar declines the nomination, but Henry votes for him anyway. Of the 70 delegates in attendance, only four cast their vote for Delabar, two of whom are from St. Louis. Gompers wins by a large margin and we are left to wonder what motivated our founder. A review of the previous year’s convention minutes may give us some insight, but our conclusions are purely conjecture.

During the AFL Convention of 1889 a delegate from the Central Labor Federation(CFL) of New York surrenders their AFL charter, announcing their intent to join forces with the Central Labor Union of New York, also an AFL affiliate. Some CFL member organizations oppose this action and begin holding clandestine meetings. They decide to reorganize their federation and apply for a new charter with the AFL. This new charter application is hotly debated during the 1890 AFL Convention wherein Gompers refuses to grant the new charter or return the original. He offers the following justification:

"If I were to issue a charter to the Central Labor Federation of New York, I could vouchsafe for myself peace of mind and the avoidance of a great deal of trouble, but it would mean the capture of the trade union movement by the Socialist party. That would be the end of trade union efficiency in the cause of the workers for a quarter of a century. By the refusal to issue I am inviting endless trouble, but the trade union movement will be saved. In the face of this situation I have no other choice but duty."

As the debate continues, August Delabar rises in support of granting the new charter and specifically, allowing the Socialist Labor Party (SLP) recognition within the AFL:

“Mr. Delabar claimed that it would be a mistake not to grant the charter to the C.F.L..They aided the Bakers Organizations, and prevented the destruction of their National Union. If the A.F of L. allowed local central organizations it should allow them to decide for themselves who are to be represented. It was wrong to say they should not come in as the S.L.P. and allow them as Federal Labor Unions.”

The following passage from Socialism as an Incubus for the American Labor Movement by James William Sullivan dispels any doubt that our founders vote was in support of the Socialists (last line):

“In his report in 1891, at Birmingham, President Gompers stated that whereas some had during the year "pretended to say that the Federation had declared against political action by the working people," "the affiliated unions are guaranteed autonomy and independence." "What the convention declared was that a political party, as a party, known by any name, had no right to representation in the trade union councils." On the occasion of his re-election, toward the close of the convention, Mr. Gompers polling 1,378 votes, the Socialists cast 120 votes for their candidate Delegate Delabar, though he had declined the nomination.”

Given the preponderance of evidence it would appear our founding father was, at the very least, sympathetic to the Socialist movement, if not a Socialist himself. It is important to point out here how President Gompers is very careful to separate Socialists and Socialism from the Socialist Labor Party. One, the SLP, he sees as a political organization and vows to forbid access to the AFL by any means necessary. The other, Socialists, he welcomes as long as they are members of a trade union. He voices his recognition of the work of Socialists to aid the American Trade Union movement, but draws a clear, very carefully worded distinction between progress of labor movements in European countries with Socialist political systems and the progress of the American and Great Britain Trade Union movements. He rejects the idea that the success of the American Trade Union movement is because of European Socialism, stating several times that we are ahead (in many ways) of the movements in these countries due to our democratic system of government.

Henry was well traveled, having worked all across the country, and the prevalence of socialists among German immigrants is well documented. Henry would again be our delegate to the AFL convention in 1892, but this time Gompers is unopposed and Henry is welcomed in good standing during the third day’s afternoon session. These stark contrasts permeate our knowledge of Henry – first a Grand President, then a Grand Organizer, then again a lineman involved in a jobsite accident that would prove fatal. We are left to wonder if Henry’s Socialism drove him from our central leadership or if he left on his own accord. Either way we are on a quest to find out more about the mysterious Henry Miller.